ModSnmp is a Modbus to SNMP converter, which acts as a bridge or gateway between SNMP managers and Modbus devices.

ModSnmp operates as an SNMP agent, handling requests from SNMP managers. In order to respond to SNMP requests, ModSnmp sends requests to Modbus slaves and uses their responses to construct the SNMP responses.

Figure 1. In this configuration example, the SNMP Manager (B) and ModSnmp (A) are on 2 independent machines, but they might equally well be on the same machine if the location of devices and their connections allow it. ModSnmp produces an MIB script file (F) containing the OIDs needed by the SNMP manager. This can be imported to the manager directly or by a 'converter' application (C). On the left side of the figure ModSnmp communicates with local Modbus devices over RS232 (Slave #1), RS485 (Slaves #2-5), and with more remote devices over the internet or an intranet (Slaves #6-11, #12-15).

The price of a ModSnmp licence depends on the maximum number of variables (Modbus registers) that you need to access. All licence options allow access to an unlimited number of devices.

ModSnmp's other main features are:

You can download the complete version of ModSnmp for a free 30-day evaluation period. 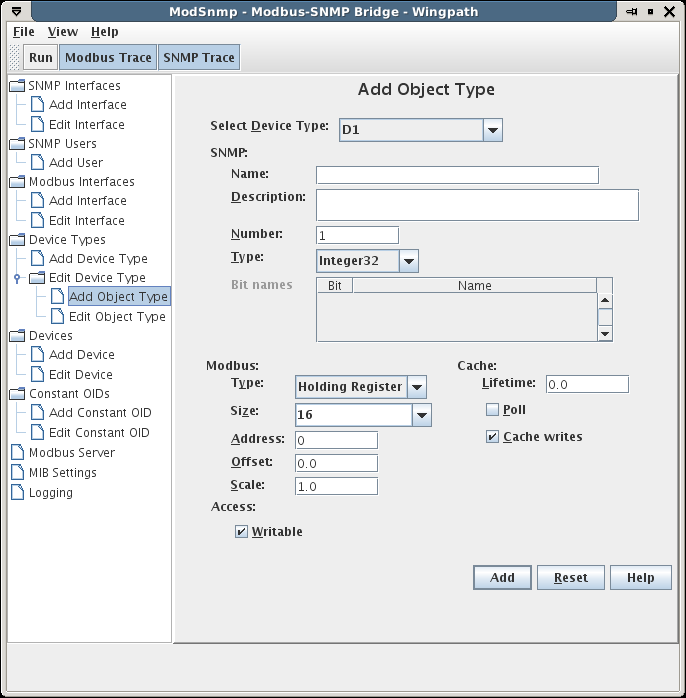